Friendship Mountain :: Everything else :: Books

I just finished A Dance with Dragons, which feels like a feat. I read all of them over this last year (I think). They're pretty great, but you don't need me to tell you that. A lot of people are reading A Song of Ice and Fire since the HBO series started. I believe I started when I heard they were going to series. They suddenly became interesting to me. It was probably the involvement of Sean Bean and Peter Dinklage.

If a tremendously long, still unfinished fantasy series doesn't sound all that appealing to you I would suggest The First Law series by Joe Abercrombie. Another fantasy series that spans three novels and is (get this!) actually completed. It moves furiously fast compared to similar series and has some of the most interesting characters of the genre. I'd almost go as far to call it a gateway into fantasy, for those put off by Tolkien type fare (people like me). Bob has also read it. He's a fan as well.

Anybody got a recommendation for me? I'm reading a few shorter books at the moment, but I'm a quick reader. Anybody read Wheel of Time? I've been thinking of trying it out.

Read The Talisman and Black House already! I'm not ranked Stephen King for nothing. 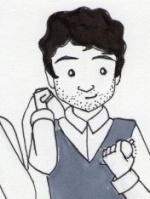 Let me tell you a little story about Dan and "The Game of Thrones". I had bought the book in the Miami airport during my move back to the States from Suriname. I read it in a couple of weeks and moved on to the next a month or so later. By that time I was back in CL and Dan was visiting me. I gave him Game of Thrones and recommended that he give it a try. He sounded interested until he opened the back cover and saw the printed advertisement for the Game of Thrones customizable card game. The interest immediately left him and he refused my offered book. He snubbed Game of Thrones because it, or at least some aspects of it, were too nerdy for him. Now he's fronting like some kind of superfan.

I have no recollection of this, but I do not doubt its validity.

Bob wrote:Read The Talisman and Black House already! I'm not ranked Stephen King for nothing.

I need to read those. For other Stephen King reading I'd recommend The Mist and Firestarter(Don't let the movie keep you away).

If you're looking for Stephen King books, I recommend the Bachman books the most. They're the darkest and most fucked-up. If you can find a copy of "The Bachman Books," you can read his out-of-print novella "Rage," which is pretty much crazy awesome. Beyond the field of Mr. King, I really enjoyed M.G. Lewis' "The Monk" recently. It's a gothic novel from 1795, and it is BRILLIANT. Have you read any of the works of Nabokov? It's a little bit like "Lolita."

Rage looks pretty good. I think I'm going to hunt down a copy.

"Perdido Street Station" by China Mieville is probably the best book of all time, not counting the Song of Ice and Fire series.

I am reading through it a third time right now. Still one of my favorites. Its a unique form of cyberpunk with some great social commentary and an interesting sense of humor. You all should check it out...especially Dan who has been too much of a wimp to get all the way through it.

Palooka.Kolbe wrote:I am reading through it a third time right now. Still one of my favorites. Its a unique form of cyberpunk with some great social commentary and an interesting sense of humor. You all should check it out...especially Dan who has been too much of a wimp to get all the way through it.

I loved Snow Crash. I liked The Diamond Age (also Neal Stephenson) as well. Reading both books may give you an uncomfortable if not accurate insight into the authors sexual um..eccentricities.

Friendship Mountain :: Everything else :: Books